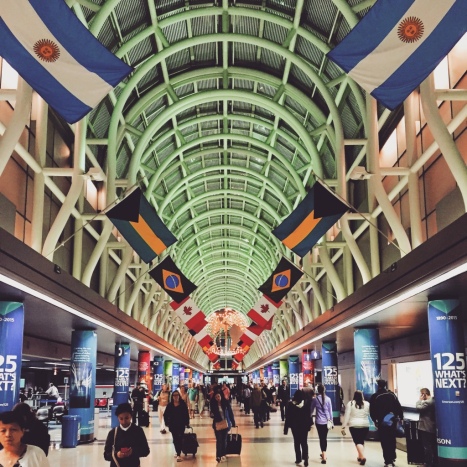 As a first timer, I’d gotten many great pointers about handling such an enormous gathering. However, having now been there myself, here are a few more tips for attending massive conferences:

While the Buddhist philosophy of taking “the Middle Way” applies to most parts of life, it may not apply to big conferences. Colleagues had advised me to avoid the “big name” sessions, which are generally bursting with attendees dying to meet their academic idols. Others told me to ONLY attend such sessions, because smaller ones can be “hit and miss” in their quality.

I actually felt I got the most bang for my buck by either going HUGE or tiny. I actually found the the more medium-sized sessions–generally paper presentations grouped by themes–were still small enough to vary by quality, but still too formally structured with too large an audience to really get to interact with anyone. Not so for the tiniest sessions. These “round tables” were literally just that: People sat around a table and talked about works in progress. The intimate setting was great for  having a real, authentic conversations with those genuinely eager to speak to you. This is definitely the place to find partners for future projects.

At the same time, the other end of the spectrum was rewarding in a much different way. The incredible speakers at the major sessions delivered inspirational calls to action that very much set the tone for the rest of the conference. AERA attendees were all commenting on the key sessions by fabulous scholars such as Gloria Ladson-Billings and AERA President Joyce King in almost every session for the rest of the conference.

However, it can be quite difficult for the shy among us to actually meet people at any size of session, which is why…

Embarrassingly enough, I may have made more connections through Twitter than I did in person. But looking back, I see why this makes sense. Conferences generally have an official hashtag (check out #AERA15 if you missed the conference). On Twitter, you can see what conversations people are having about the session you’re attending—as well as those you had to miss. Not only can you “follow” those who tweet at the conference, but you can also run into people you recognize and say “I saw what you tweeted about xyz. Wasn’t that session great?” Oftentimes, the person will actually recognize you and say, “Oh, I saw you followed me on Twitter yesterday – I’m following you now as well!”

Ultimately, getting a Twitter follower may be more productive than swapping business cards (though definitely have those as well). If we swap business cards, maybe we’ll exchange a “nice to meet you” email, and maybe a follow up or two. But a Twitter follower is going to get small reminders about you every time you show up in the news feed. People will get to know you and your work, so you’ll likely have a much deeper connection the next time you run into each other. You’ll be able to say “Hey, I’ve been reading your tweets on xyz recently” as opposed to “Remember that time we exchanged business cards a year ago and didn’t really connect after that?” 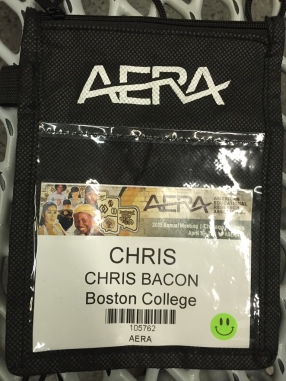 3. Work the Fact that You’re a Grad Student This advice came to me via my colleague Kate Soules: People generally love giving advice to grad students and will often go out of their way to do so – even the “big names.” Once you graduate and get a job, however, for some reason people are oftentimes less eager to help you.Once you’re a first year faculty member, you’re apparently  supposed to have your life together or something….

Some of the best sessions I attended were those specifically geared toward grad students, where experienced scholars—rather than feeling pressured to show off their latest work—really open up about the secrets of their trade. Most genuinely want to share what they wish they’d known as graduate students themselves to save you the trouble they went though. These were all hugely rewarding sessions.

4. Attend the (Figurative & Literal) “Cocktail Party”  In the first semester of my PhD program, one of my professors likened writing an academic literature review to attending a cocktail party: You dive into the “big room” of research and “see what conversations people are having.” I believe she meant this as a metaphor, but I now see this can be taken quite literally as well.

Most big conferences have particular divisions. AERA has twelve divisions and over 100 special interest groups (SIGs). While you can read about each on the website to get a vague sense of their different goals and purposes, actually attending these groups’ meetings is much more revealing. Groups with names that may seem redundant, like “Research in Reading” and “Writing and Literacies,” may actually have widely divergent philosophies and cater to vastly different memberships. Each group very much has its own “culture,” with some more welcoming, innovative, or (lets be honest) more fun than others.I never would have understood this without attending their—figurative and literal—cocktail parties.

In general, at least as a grad student, attending a major conference was much less about learning about the research itself (though you will), and more a process of socialization/enculturation into the profession. It’s about shopping around, finding the people who are doing the work you want to do, and seeing where you fit.

Others who have attended major conferences—educational or otherwise—what advice would you add?