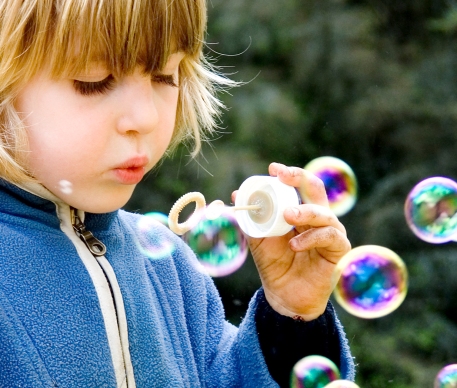 We once thought kids learned language by mimicking their parents (think B.F. Skinner and all that “tabula rasa/blank slate waiting to be filled” business). But then researchers (e.g. Pre-political-activist Noam Chomsky) started to look at kids’ “errors,” like the one above, and realized this didn’t tell the whole story….

In the sentence above, the child has never actually heard the word “hitted” from her parents or anyone else. Instead, she’s taking a rule she knows – that we put an “ed” at the end of past-tense words – and applying it to a new situation. In this case, since English is crazy and “hit” is an irregular verb, we’d call her sentence a “mistake” or, in linguistics, an “overgeneralization.” The point is, the kid is doing more than mimicking language here, she’s creating it herself.

What’s even more amazing is that, in all likelihood, no one has ever sitted (I had to) down with her and explicitly explained the “ed” rule – she figured it out on her own. This is the part where you remember the scene in Jurassic Park where the Velociraptors figure out how to open the door…

Not only should that statement be accompanied by foreboding music, but it also reveals another amazing aspect of language learning: Barring extreme neglect or disability – you learned your first language with 100% accuracy with little to no formal instruction. Seriously. Think about that for a moment… As any teacher will tell you, 100% of kids learning anything with 100% accuracy is a double miracle, and yet we’ve all done it when it comes to one of the most complex cognitive processes humans perform.

Now, of course, we’ve all learned different versions of our first language, and these may or may not be considered “correct.” It wasn’t until I moved out of South Dakota, for example, that I realized “spendy” (meaning expensive) was not an actual word. But the mythical concept of a “standard” dialect has been fodder for some of my other posts (like this one, and this one). The point is, odds are that you managed to learn your home language perfectly with little more than observation and a good dose of parental encouragement. What other skill on the planet are we this naturally inclined to take on?

Those of you with lil’uns in your lives will instantly recognize some of these “10 Language Mistakes Kids Make That Are Actually Pretty Smart.” For example, here’s whats going on when a kid points to an object and says “thank you” as a way of asking for it:

“This mistake shows complex knowledge of pragmatics, or the meaning of words in contexts. He knows that “thank you” is not the name of a thing in the world, but is rather something we say in a specific context. “Thank you” occurs in the context of a transfer of possession. He’s saying, “Let’s do that thing where ‘thank you’ gets said.” Very clever way to try to bring about a transfer of possession!”

As with “hitted,” when you think about the logic behind these utterances, they’re not “mistakes” at all. Rather, as the article above describes it, they are  “evidence of very smart hypotheses the kids are forming from the limited data they’ve been given so far.”

Any other thoughts or examples? Also, do you think the principle of “mistakes = logical hypotheses” applies to learning a second language as well?